Being one of the oldest and largest cities in the state of Uttar Pradesh, Ghaziabad is also developed and commercialized city. Being the first city to be on the main route on the way to Uttar Pradesh from our national capital i.e. New Delhi, it is often referred as the “Gateway of UP”. One of the most well planned cities in terms of industrialization in the state, the city of Ghaziabad is the administrative headquarters for Ghaziabad District.

The history of Ghaziabad goes back to 2500 BC. As per the archaeological excavations, it has been proved that the civilization in Ghaziabad existed from the times of Samudra Gupta from the Gupta dynasty. Ever since, Ghaziabad was ruled over by Martha Kings, Mughals and British Forces. The famous KOT was during the fourth century and is considered to be the most historical event in the after years of the city.

Due to all the industrialization and commercial growth, the city of Ghaziabad has appealed people from various parts of the nation for employment options hence making it a thorough cosmopolitan city. The generic language spoken in the city is Hindi.  Other prominent languages are Urdu, Bengali, Rajasthani, Haryanvi amongst many others. These communities have their own existence in all parts and segments of the city.

Being a part of the ever so happening NCR in northern India, it has picked up its speed and style when it comes to lifestyle and day to day living. With all the corporates coming into the city, the educated workforce of the city has witnessed a rise of the per capita income in turn helping them for the betterment of their lifestyle. The city of Ghaziabad is into the urban culture of fashion, beauty parlours, gymnasium on a regular basis in order to stay fit amongst various other lifestyle choices. Ghaziabad also has some prominent malls which brings people even from Delhi to shop in those malls. Ghaziabad is well conncted with teh NCR by means of public transport like buses, autos and metro rail. The nearest airport is Rajiv Gandhi Internatioal Airport in Delhi. 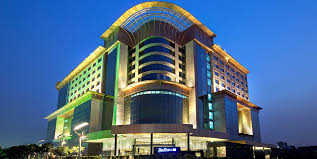 Primarily known as a manufacturing city, Ghaziabad had its major growth in terms of business and economy due to the same. Later on, due to the development of infrastructure and educational facilities, a lot of enhancement was seen in other sectors like IT, ITES, oil, gas, textile and heavy machinery amongst others.

With a population of close to 47 Lacs as per the 2011 survey, the Ghaziabad District represents the 2.33% of the overall people living in the state of Uttar Pradesh. The literacy rate of Ghaziabad is as high as 91% which makes the city to be referred as the “Oxford of the North”. There has been a growth of close to 47% in the population since the census of 2001 and that is primarily due to all the industrialization in the city and people moving in from various parts of the country.

Weather and Climate of Ghaziabad

The climate of Ghaziabad is pretty much the same as any other city in north India like New Delhi or Noida. The city only observes three seasons which are summer, winter and rainy. The temperature rises up to as high as 48 degrees during summer and as low as 4 degrees during winter. The monsoon is generally experienced during the months of July – October.

The city of Ghaziabad is one of the most beautiful places in the state of Uttar Pradesh. It is also immensely prosperous when it comes to religious and historical values.