Ghaziabad is one of the largest and oldest cities in the state of Uttar Pradesh. The city which is adjacent to New Delhi also shares the boundary with the district of Meerut, is  called the “Gateway of UP”. Being one of the most strategically placed locations next to the national capital, it is one of the most industrialized cities and an important educational hub in the state 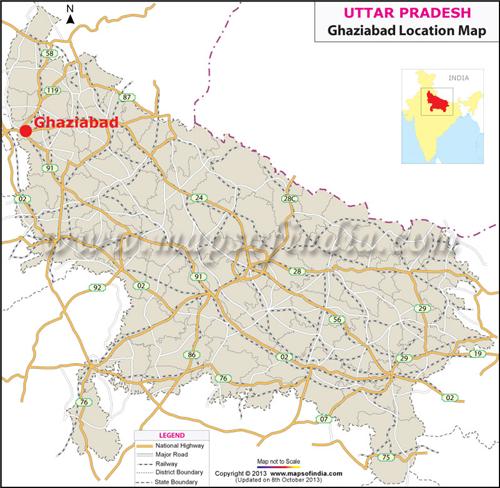 Ghaziabad is situated on the banks of Hindon River. Based out of the Upper Gangetic Plains, the city is divided into two major divisions by the Hindon River called as the Trans-Hindon on the west side and Cis-Hindon on the east. The city of Ghaziabad is situated approximately 2.5 Km from the Hindon River and is surrounded by the Meerut District on the north, Bulandshahar and Gautambudh Nagar on the south along with Delhi and Hapur on the south-west and east side respectively. Some may refer as the city being situated on the Ganga-Yamuna doab. Ghaziabad city is based out at 280, 40 Degrees North and 770, 25 Degrees East and is a rectangular city in shape with a length of 72 Kms and the width of 37 Kms.

Being on the Northern Part of India and next to New Delhi, the temperature is pretty much the same as the national capital. Just like any other district up north, Ghaziabad has three seasons which are summer, winter and rainy. With the climate altering all the time due to the dust storms in Rajasthan and snow falls in Himalayas, Ghaziabad never has a constant weather. The weather generally is between 32 to 46 degrees and 4 to 12 degrees in summers and winters respectively. The monsoon which generally starts in the month of July prevails till October.

Ghaziabad is one of the most commercialized cities in the state hence sees a lot of employment and educational options due to which we see a lot of people migrating from various parts of the nation to this city.

As per the 2011 Census, the total population of Ghaziabad is 4,661,452 which makes it the 28th highest populous in the country. With a population grown rate of 41.66 per cent from 2001-2011, it is one of the fastest growing cities in the state. The Census gender population as per the last report was 2,481,803 and 2,179,649 for male and female respectively. The city has a sex ration of 878 females to 1000 males. With the literacy rate of 91 per cent as per the 2011 survey, it is also considered to be the Oxford of North India. With the socio-economic standards below the national average, Ghaziabad is termed as a B1 district of category B.

How to reach Ghaziabad

On a distance of roughly 30 Km and 25 Km from Hazrat Nizamuddin and New Delhi Railway Station, it takes approximately 50 minutes and 40 minutes respectively to reach Ghaziabad. It takes approximately one hour from the Indira Gandhi International Airport. One could also take their private conveyance to reach the city as the roads are pretty well connected as well.

Ghaziabad is thoroughly one of the go to places in the state and the geographical convenience puts it on the charts as the most sought after city.